I’ve done something I never dreamed I would do, something I’ve grumbled and blogged about. I learnt my lesson on “never say never in this country, but as these innocuous sounding words slipped out of my lips, I too was in disbelief.

It happened in the most pedestrian of places, the Albert Heijn. I was waiting in line at the paracetamol/cigarettes/shavers/post/randomness counter (you know the one!). Weighed down by an active 1.5 year old, a bag of groceries, and 2 parcels to ship as gifts to the other side of the world – a Dutch person casually sauntered into the store, glanced at the existing line of customers waiting on the 15-year-old to figure out the Dutch postal system, and nonchalantly proceeded to walk up to the counter and place their order. There was clearly a line of customers in sight, and clearly others were waiting (and waiting) patiently to be served. But apparently it did NOT matter.

This was no accidental case of ‘overlooking’ the line. I had seen it happen time and time again, but today was different. Today I was hot and tired, and baby was even more hot and tired and together we weren’t the loveliest of duos. And so, loudly, and brimming with 9 years of ‘why-the-heck-can-you-people-not-learn-to-wait-your-turn’ angst, a little Dutch word escaped my lips.

The perpetrator’s head snapped back to look at me immediately. But apparently I wasn’t stopping there, as I followed up with a loud “doe eens normaal!!” .

I suppose it could be seen as completing some imaginary level of Dutch integration. The Dutch phrase escaped my lips even before I had time to think about my response (let alone the language would be in). No other English or Dutch phrase could have said it better. What did this signify? I’d always laughed at the associations of that culturally ingrained Dutch phrase. Just who defined this set definition of normal?? Was I now on the path of becoming one of them? 😉

It must be said: Dutch people have an utter disregard for lines, queuing and generally waiting their turn. When I was fresh-off-the-boat it used to drive me utterly mad. Venturing into the city was an exhausting pursuit: my lack of language skills coupled with Dutch people’s lack of queuing-manners used to make my blood boil. Where were the manners? Where was the civility? Had Dutch people somehow missed that basic childhood lesson of not cutting in line! 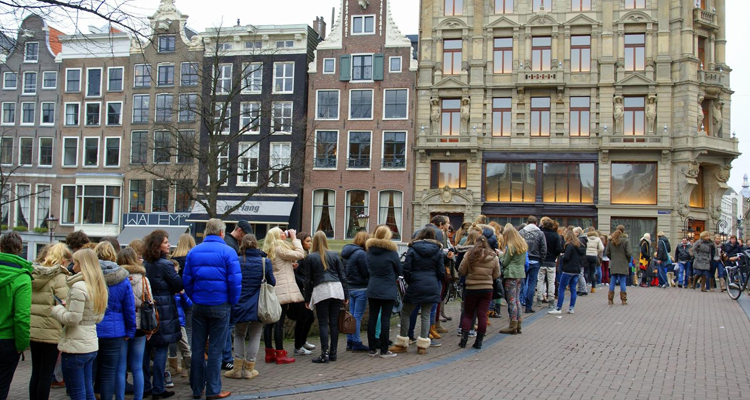 But it wasn’t just me. Over the years I’ve heard loads of other foreign friends, visitors and tourists equally irate when discussing he matter. I remember a good Aussie friend of mine describing her daily commute from Utrecht to Amsterdam each morning. When boarding and exiting each train, bus and metro she encountered a mad stampede of line cutting, pushing and elbows. Exasperated one evening over drinks she proclaimed. “I can’t do it anymore. I feel my blood pressure rising every morning in this country. It’s like boarding the train with effing animals!”

Over the past decade, I’ve seen some progress in the Dutch domain of queuing… or at least I believe I have.  Sometimes it’s hard to get a grasp on my own cultural evolution and that of the Dutchies. Had they really gotten better at queuing or had I just become more tolerant of the chaos? Had they changed, or had I?

One thing is for sure , I can’t say I really notice it that much any more – apart from the odd harried day at Albert Hein when my Canadian roots take hold and oddly, shout out in Dutch.

p.s. perhaps this video should be mandatory viewing? 😉