A few days ago we published on our Instagram page a photo of an adorable little pink canal house from the Dutch city of Leiden, with the caption: “Can we move into that pretty little pink house today please? “

What we’ve always loved about the Stuff Dutch People Like community is how invested, clever and quick our readers are. Within moments more than a few fans had chimed in with some intriguing comments (ex: “Are you SURE you want to live there?”). We set to work to find out more, and as it turns out, this cute little house has quite the history!

Nestled between two other golden-age canal homes, the diminutive Groenhazengracht 3 was built during the first half of the seventeen century in the city of Leiden. Leiden is located on the Old Rhine (a branch of the Rhine delta) and located some 40 kilometres south of Amsterdam. It turns out our pink little dream house, Groenhazengracht 3, was home to a well-know prostitute and madame, who went by the nickname of Groene Haasje (little green hare).

Prostitution in the Netherlands was tolerated by the Dutch in the middle ages, however, it was still seen as a dishonourable profession.  As such, specific areas of the city were designated for sex-work, to keep “lewd” activities out of plain sight. Thus it was not so unusual for Groene Haasje to live on one of Leiden’s quaint canal streets, as this area at the time had been designated as a “red-light district” of sorts.

An early example of Dutch pragmatism towards prostitution can be seen in the below 1413 decree from the city of Amsterdam:

“Because whores are necessary in big cities and especially in cities of commerce such as ours – indeed it is far better to have these women than not to have them – and also because the holy church tolerates whores on good grounds, for these reasons the court and sheriff of Amsterdam shall not entirely forbid the keeping of brothels.“

However, the 16th-century saw the rise of Protestantism and a souring of attitudes towards prostitution. Church and state were no longer separated; sex-work was viewed as a sin and thus punishable by law.

Some Dutch cities, however, such as Amsterdam, decided against complete prohibition and instead choose to regulate the activities, carving out specific areas of the city reserved for brothels. With the Golden Age in full swing, the 17th-century brought forth a return of the laissez-fair attitude of the middle ages. Brothels were left, for the most part, to their own devices.

During this time a new form of brothel – the Play/Music House – emerged. These establishments were tucked inside city-center buildings, combining music, food and dance in opulent settings. Not surprising, paintings from this period also reflected the laid-back attitudes of the day, frequently featuring brothel scenes and portraying prostitutes as beautiful young women  (their clients however did not fare so well, often appearing as the fool). Hence, our Groenehazengracht madame and her brothel would have been both known – and tolerated – by city officials. 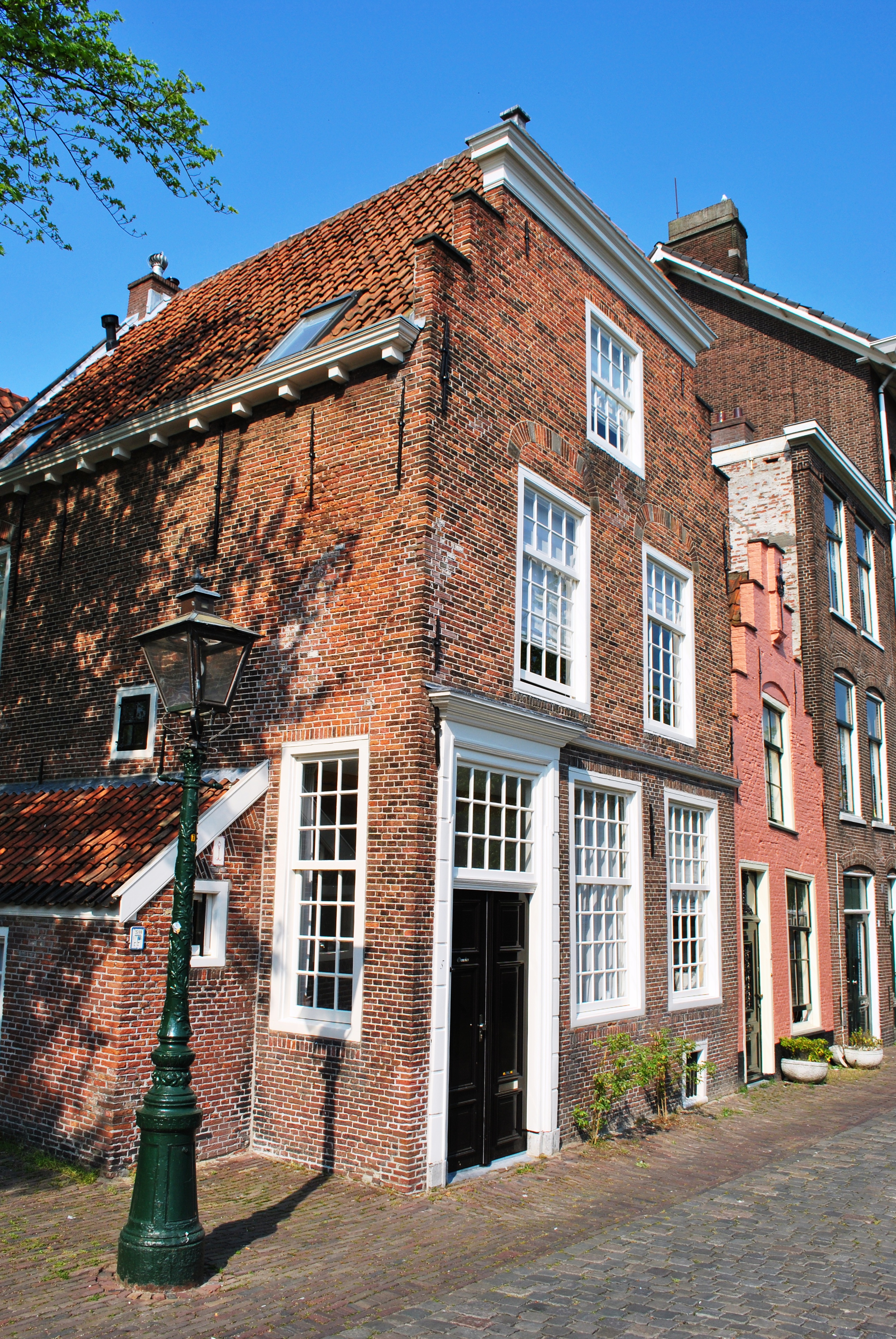 What’s in a name
Prior to taking on its current name, the canal street was known as Jan van Woudengracht. City records show the name was changed in the late 17th-century.

What ever happened to the woman known as Groene Haasje? Did she live out her days in Leiden’s smallest house?

Little is known of her later history, however, it does seem as though the now pink-painted brickwork is an ode to her colourful past... and yes, dear readers, we’d still like to move in!