An exodus is soon to hit the lowlands. Dutch people will be fleeing this flat little country en-masse over the next few weeks. The oddity isn’t so much that they are leaving (who can blame them with this Dutch “summer”?) but the fact that they exit the country in a very peculiar, yet strikingly similar manner. Come 17:30 sharp on a Friday the Dutch will hit the highways in their fully stocked car or caravan brimming with supplies.

What on earth is happening? And where are these thousands of Dutch people headed? Well my friends – it‘s VAKANTIETIJD!!

Don’t believe us? According to the Dutch news site NCR, dutchies are obsessed with bringing their favourite goods from home!

Of course you may be wondering why the Dutch need to bring their own food (or toilet-paper) on vacation? We can only assume that it must be a fear of not getting a decent meal (or wipe) abroad – instead of their infamous reputation for “thriftiness”!

Now, I see you shaking your heads, thinking “Well, some Dutch do this, but NOT all of us!” Well folks, this year it is estimated that nearly 4 million Dutch people will pack up their tents and take the highly exotic camping vacation described above. That is a hell of a lot of caravans —and trust me, the local Dutch Albert Heijn‘s will be busy before they leave!

Headed that way too? You’ll be sure to spot the Dutch in the campgrounds by the abundance of blond-haired blue-eyed children running wildly. Campfires will be lit, and the occasion patriot folk-tune will be belted out. And you are sure not to miss the familiar Dutch flag flying from the caravan roof. God forbid they ever be confused for a bunch of Germans!!! 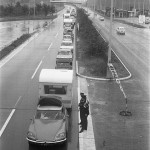 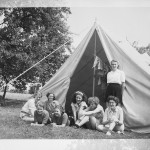 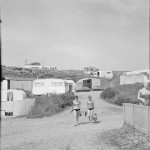