Spring in the Netherlands brings happiness to all of its inhabitants, particularly the cows. After growing up on a dairy farm, I have seen many cows, but never in my life have I seen cows as healthy looking as the ones here in the Netherlands. Due to the amount of rainfall we receive here and the rich soil, the Dutch cows have an endless supply of lush, green grass. After all, ‘friesian cows’ (also known as Holsteins in North America) do originate from an area at the top of the Netherlands, known as ‘Friesland’; so I guess I should not be surprised that they are the best looking cows I have ever seen. These Friesians are nowadays found all over the world and known as the world’s highest-production dairy animals. Friesian cattle are easily recognisable by their distinctive black and white markings, but may also be red and white in color. This Friesian colour variation apparently only exists in the Netherlands. 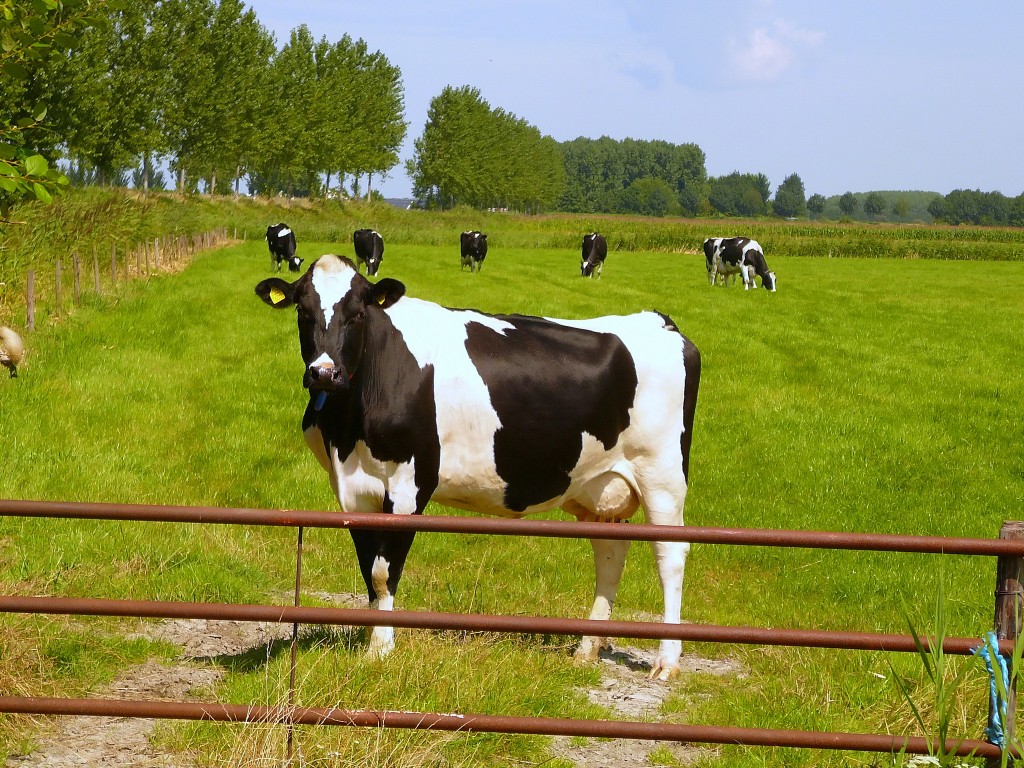 Due to the freezing temperatures in the Netherlands, the dairy cows here are brought inside for the winter months. The farmers make them as comfortable as possible during these colder months undercover with mattresses, brushes and a constant supply of hay. Once Spring arrives, the day of their ‘release’ back into the fields is a very exciting time for these cows indeed! This moment is known here in Holland as ‘Koeien in de wei’ (Cows in the pasture).

Farms throughout the Netherlands will pick a date to let their cows out into the pastures and announce it to the public via websites etc. On this special day, typically on a Saturday in April, the barn doors are opened and the cows sprint out towards the green pastures. You can’t help but smile as you watch the cows literally jumping for joy as they reach the green grass, also known as the ‘koeiendans’ (cow dance).

The fresh air, fresh grass under their hooves and more room than they are used to makes for one big party for the cows. They run, jump, stretch and spin. On this particular day each Spring they are without a doubt, the happiest cows on earth.

Every year the ‘Koeien in de wei’ is shown on the news. Hundreds of people flock from near and far to watch the happy event take place on farms throughout the country.

Just as the Dutch take pride in their houses and gardens, they also take pride in their farms and animals. The Dutch have perfected this healthy and fertile breed of dairy cow over the centuries. Dutch Holstein Frisian cows can produce no less than 30,000kg of milk in a lifetime; which is unmatched worldwide. Moreover, the Netherlands also provide the best feed, medicine and management skills to fulfill the complete genetic potential of these cows. A happy cow equals a healthy cow, which then equals maximum milk production. The Dutch sure do love their dairy products, so it is in everyone’s interest to keep the cows as happy and comfortable as possible throughout the year, both indoors and out in the green pastures.

So if you have not done so already, I hope you enjoy watching the cows jump for joy this Spring, whether it be on the television, or at a nearby farm, it is sure to make you smile! 🙂

Guest blogger Kristen is an Aussie, married to a Dutchie with two children. She now lives in the Netherlands with her family and likes to write about her life experiences adjusting to life on the other side of the world. You can connect with her via her blog and Facebook page!