After 2 years of living in the lowlands our expat-provided accommodation ran out, so we naively embarked on a Amsterdam house-hunting mission. Even though it was a good 6 years ago, I remember it well, as we visited not 5 or 6 potential apartments – but a whopping 35 in total! The whole process felt a bit like the story of “The Three Bears”: too small, too big, too hard, too soft – you get the idea.

Potential apartment #34 was one of my favourites, located on a picturesque Amsterdam canal it was like stepping into a postcard. True it was cozy (read: incredibly small), slightly damp (read: major water leakage throughout the house) and inconveniently spread out across 3 tiny levels, but it fit my new-in-Amsterdam romanticism and home-finding desperation well.

I could deal with the neighbour’s lack of curtains and the stinky herring stall below. The only downfall that I couldn’t quite come to terms with was the stairs, which could perhaps be better referred to as “the near-vertical-mountain-requiring-daily-scaling“. They resembled a treacherous ladder of sorts that required the use of all fours and the maintenance of ninja-like precision balance. Was this some sort of circus-performers house? Were mere mortals suppose to make this daily climb?

Better yet, these terrifying stairs are often accompanied by a ceiling  full of precariously dangling bicycles and strollers roped up on some hand-made elaborate rigging system. A great example once again of Dutch ingenuity, but not such a comforting sight if you start to contemplate the impeding snap of one single rope.

The trek upwards on these Dutch stairs is no doubt a mission, but the trek downwards is where things start to get really interesting. Not only are you dealing with an impossibly steep descent, but the teeny-tiny stairs don’t even allow for a full footstep (huh, but what about the Dutch’s massive feet??), and thus must be maneuvered in an awkward sidewise motion. Sometimes, for fun, these sneaky Dutch architects decided to throw in a curve, adding yet another element of danger.  It is no wonder the Dutch word for stairs is trap! How aptly named, for they are a trap indeed, of the death-trap variety!! Of course, I later found out that such staircases were not so unusual in the Netherlands and were characteristic of the 17th-century canal houses. However, you may have also asked yourself at some point, why oh why did such awkward stairwells exist?? Well, the answer is painfully simple and again (surprise, surprise 😉 can be rooted in Dutch people’s constant quest for saving a buck. Back in the day, canal houses were taxed on their width, meaning that the wider your house, the more taxes you paid. How could a clever Dutchie circumvent such an issue? Easy, simply build yourself a very tall, very skinny house which requires a crazy-ass set of stairs!

Needless to say, we didn’t end up of taking the canal view apartment. I figured I just didn’t have the Dutch-bike-balancing-circus-act qualities required for such a daily feat. We luckily settled on apartment #35 – where we’ve happily resided (with the Dutch luxury of an elevator) the last 6 years! 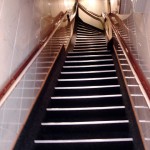 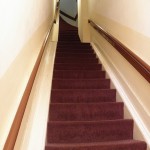 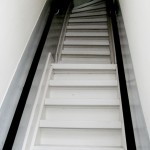 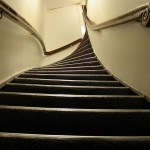 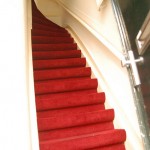