During my nearly four years as a mother in the Netherlands, it has been a fascinating ride observing the different cultural norms and behaviours associated with motherhood in the Lowlands. Barely out of the “new-mother” gates it became clear to me that Dutch mothers were different – in many ways – to the North American archetype I was used to. On first glance they appeared to be much more relaxed with their pregnancies, births, and subsequent happy babies. Was this really the case?

In the first year as I struggled with difficult decisions regarding breast-feeding (to stop or not?), daycare (am I a bad mother?) and returning to work (how can I abandon my baby?), I often noticed one striking difference between myself and the other Dutch mothers around me: guilt. Or rather, a lack of it.

Back to work
Most working mothers in the Netherlands put their children in creche at the age of 3 months. This is the standard, as Dutch maternity leave extends to 3 months after birth. Of course, some working mothers tack on an additional holiday or leave, but it is rare to see many taking a leave of longer than 4-5 months.

For both children, I opted for 7.5 months. I felt this was an acceptable compromise: somewhere between the generous Canadian one-year leave, and the Dutch 3-months. The reactions to this decision, on both sides of the Atlantic, could not have been more different. My Canadian friends and relatives all felt deeply sorry for me: “Only 7.5 months? How are you going to manage? What kind of country do you live in?”. The Dutch reactions, however, were on the complete opposite side of the spectrum and ranged from surprise to incredulousness: “How will you manage this? How can you afford that? Why would you want to??”

Of all comments, the latter caught me most by surprise. The truth was, it was never said in a heartless way. These were loving, caring working mothers, who truthfully wanted to know -and understand- my reasoning for taking a longer leave. For the most part, they knew the Dutch 3-month zwangerschapsverlof  as standard practice, a given, and did not question its right or wrongfulness. Never in these discussions did I ever hear an ounce a guilt surrounding the topic of returning to work. Of course many wished it was different and that they could spend more time with their babies, but a few also outright stated, without shame, that they were happy to have routine, structure and fulfilment back in their lives. Both camps simply accepted the reality and got on with their lives.

Breast or bottle
The attitudes I encountered towards breast-feeding were similar. My Dutch midwives, friends and colleagues all shared a common belief: breastfeeding was, of course, beneficial for the baby but simply not meant for everyone. Again, this was a rather freeing thought. It removed all notions of guilt and self-blame from the equation. Formula was not seen as an evil substitute, but rather a practical and necessary solution. I was told, time and again, by my Dutch kraamzorg, doctor and midwife that it was “just as good” as breast-milk (a claim which I do not fully agree with) and that the decision to breastfeed or not, should weigh all factors such as the mother’s health, mental state, family life, working life, sleeping situation, husband’s support, and so on.

As I struggled with breastfeeding, sleeplessness and exhaustion, my Dutch midwife sat me down and matter-of-factly said “Colleen, it’s just like on the airplane. You must put on your air-mask before the baby’s. A healthy, happy mother is much more important than which milk your baby drinks”.

This would be the first, of many times, I would hear the “oxygen-mask-first” adage in relation to motherhood. A simple, yet effective comparison, rooted in traditional Dutch pragmatism.  As I left the hospital with my second child, my Dutch maternity nurse repeated the phrase, this time with an added caveat: “Take care of yourself first – and feel no guilt in the process”.

The bottom line is, Dutch mothers simply don’t feel as guilty as North Americans – and that’s a good thing.  This healthy attitude allows them to achieve a much more balanced approach to motherhood and its demands. In the Maclean’s magazine article  “How Dutch women got to be the happiest in the world”, the author argues:

“Dutch women have smashed the vicious circle of guilt that traps other Western women, to embrace a progressive form of work-life balance.”

Has all this happiness rubbed off on me? I’d like to think so. I work four days a week, and have managed to banish all guilt surrounding this decision. I love my children, I love what I do, and I’ve learnt from the other Dutch moms around me that there is no “one-size-fits-all” to motherhood. Dutch women rarely compare themselves to each other. You hear neither self-praise or self-doubt in relation to their personal parenting decisions. They are in fact that, personal – and rightfully respected as such. 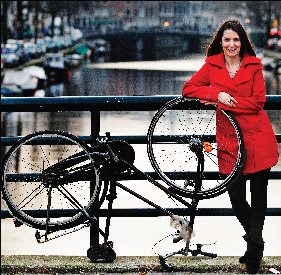 Colleen Geske
Colleen Geske is the founder of Stuff Dutch People Like. Originally from Canada, Colleen has called Amsterdam her home since 2004.  When not working, Colleen spends her time over-analyzing the behaviour of the two tiny people determined to take over her home.
Follow Colleen on Twitter.