You cannot possibly have a blog discussing stuff that the Dutch like and not have freakin’ FOOTBALL on the list!

It’s a good time to be in the Netherlands: the sun is shinning, everyone seems to be on some sort of extended holiday, the World Cup is playing, and the Dutch are doing pretty darn well so far! So well in fact, that the chances of the Dutch team making it to the finals could be a bloody reality real soon!

Dutch people are (unlike myself a self-proclaimed “football-fan-when-gezellig“) mad for the stuff and take it very seriously ALL year round. In fact, football (aka: soccer) is THE most popular sport in the Netherlands! (America’s most popular sport is also ‘football’ – but we’re talking the oval ball kind) 😉

The Royal Dutch Football Association (KNVB) was founded in 1889 and later joined FIFA in 1904 as one of the founding members alongside Spain, France, Belgium, Denmark, Sweden and Switzerland. To put this is perspective, Canada – the COUNTRY- was only founded a short 12 years before the first Dutch football club was founded!

Over the decades Dutch people have madly cheered on their beloved Oranje – while dressed in oranje! Sadly the Flying Dutchmen have never been able to secure a World Cup win. Of course, there have been many near-misses but victory has remained elusive…

The Dutch team however are winners at something: unfortunately that something happens to be the number of times a team has reached the World Cup finals without ever winning.  3 times, my friends! 3  heart-breaking times! 🙁 🙁 🙁

Tonight the Dutch play against Argentina. So many questions: Will Oranje pull this off??  Will we see the Dutch in the finals for the fourth time? Who will they battle? Will they finally be able to make history?

One thing is for sure: NOTHING would be more crushing then a loss to the Germans! (If that happens – head for the border folks! Flee!!! You certaintly don’t want to be in the country while a national depression takes hold!!)

P.S. Have you got your ORANGE gear ready? Them Dutchies take fandom preeeetty seriously!

P.P.S. Oh…and if you’re wondering who I’m cheering for? It’s the Dutch of course! Afterall, they’ve got a Canadian on their team! 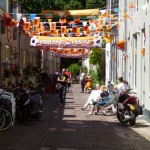 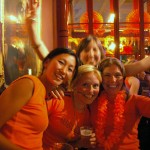 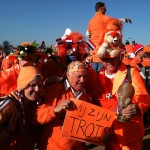 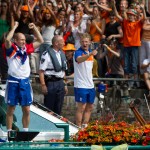